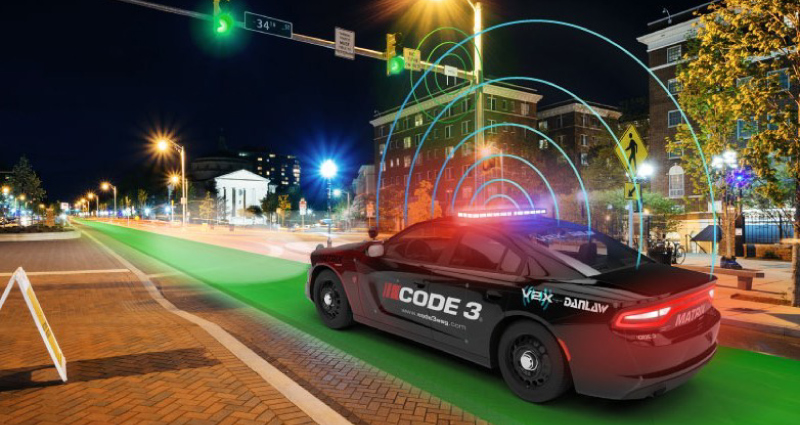 When there is a medical emergency, time is of the essence. But ambulances get caught in congestion. Traffic lights work against them. City streets turn into cramped parking lots. The loss of even seconds can mean the difference between survival or crossing over the rainbow.

With new vehicle-to-everything (V2X) technology, emergency vehicles can communicate and coordinate with traffic signals so they can get to their destinations as fast as possible. V2X stands for vehicle-to-everything, and is a communication system that exchanges information from a vehicle to any entity that may affect the vehicle, and vice-versa. The technology will be useful in other vehicles, especially autonomous cars.

Enter Danlaw, a company that works in the connected vehicle technology space. After a major pilot program in Macomb County, Michigan, Danlaw debuted its V2X tech on a prototype police car at the ITS 28th Annual Meeting in Washington, D.C., this June. It developed the system with Code 3, a provider of light and sound solutions for emergency vehicles. Danlaw has since been on tour, presenting their cop cruiser to entities such as the Michigan Department of Transportation, as well as other outside the state.

Communicating with traffic signals Danlaw and Code 3 have tackled traffic lights causing delays for emergency vehicles with what they claim is the industry’s first fully integrated V2X system operating through a lighting module. An antenna acts as a transmitter communicating with traffic signals and the vehicle. Danlaw’s AutoLink Onboard Unit is integrated with Code 3’s emergency vehicle system. Through this system, first responders can get a 360-degree picture of what’s going on around them on the streets.

It works at the flip of a switch. When the emergency lights and siren are turned on, the V2X system sends a signal to the traffic light to temporarily change the light to green so the vehicle can move through the intersection without stopping. Of course, cross traffic gets stopped by a red light.

Emergency vehicles may be some of the first to get V2X technology but many engineers believe that without it, a fully autonomous transportation system can’t become reality.