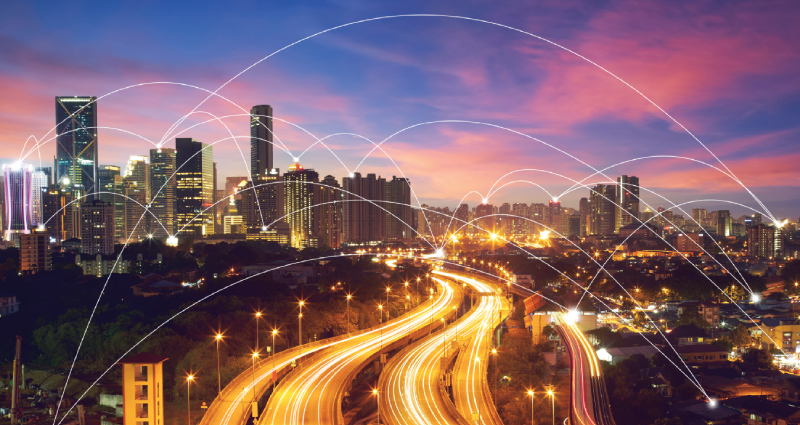 Today’s smart cities are evolving into innovation hubs, integrating modern technology with existing infrastructure to create a city-wide ecosystem of sensors, vehicles, and people.  The rapid rise of urbanization is compelling many municipalities to reevaluate transportation initiatives and seek out ways to ease congestion and improve pedestrian safety.

From public transportation and ridesharing, to sanitation and emergency response, it’s becoming increasingly common for cities to explore smart solutions for local problems. In fact, a recent survey by the National League of Cities estimated that 66% of cities in the United States have already invested in connected technology, while another 25% are evaluating potential solutions.

While V2X-enabled vehicles are dominating today’s transportation conversation, connected infrastructure is a key component in smart city systems. V2X adoption among local governments, big and small, will play a significant role in determining whether people accept and interact with connected technology. By embracing new advancements and integrating V2X into their roadways and traffic controller equipment, municipalities across the US will be able to create an engaging smart-driving experience from city to city.

As smart city ecosystems continue to flourish, it has become more apparent that V2X technology is not one-size-fits-all. Municipalities of varying sizes and geographical features will have different program requirements, ranging from local laws that regulate smart city applications to the type of hardware and software needed for effective communication.

Smaller municipalities seeking to implement a V2X program can significantly shape their local transportation environment by targeting high-traffic areas to reduce congestion and minimize accidents. Compared to their big-city counterparts, small cities typically require less capital and fewer V2X-enabled devices for a successful deployment. The resulting vehicle-to-vehicle (V2V) and vehicle-to-infrastructure (V2I) framework will create safer and more efficient roads at a fraction of the cost.

Before diving into smart city planning, municipalities must understand the challenges associated with a V2X initiative and plot a course to maneuver around these obstacles.

Install a few roadside units or cameras at an intersection and people will start asking questions. When new V2X technology is rolled out, cities will need to address residents directly to ease concerns and encourage engagement with the new technology. Residents will need to understand how V2X benefits themselves and other drivers on the road.

As with all technologies, V2X systems are continuously updated, refined, and rereleased. Device manufacturers and automakers alike are investing in R&D to improve existing technology and innovate new solutions that address the needs of smart city initiatives.At the same time, newly-equipped vehicles and infrastructure are being incorporated into the V2X grid regularly. Small municipalities hoping to participate in a smart city program will need to strike a budgetary balance between long-term city planning and keeping up-to-date with the latest technology.

In the US, V2X devices are either communicating via DSRC (based on IEEE 802.11 standard) or using 3GPP Cellular-V2X. Both forms of communications have their merits and limitations, but neither is mandated by the government as the “standard” method of communication.Until a decision is made at the federal level, automakers, tech companies, and municipalities will need to decide for themselves which option to implement. If at some point in the future the federal government does regulate V2X communication, smart systems that have already been installed may be affected.

If a driver crosses the border from one smart city to another, do they lose V2X connectivity? Will their vehicle still communicate with other vehicles and pedestrians to avoid collisions?A V2X program would be less effective if inhabitants could only connect to cars and infrastructure in their own city. When integrating V2X technology with traffic controller equipment, backhaul networks, city fleet vehicles, and consumer cars, municipalities will need to work to ensure interoperability with programs in neighboring cities.

While larger cities may have the budget to hire independent labs to test products for interoperability, smaller cities have more limited resources. To address this issue, Danlaw has gone the extra mile to earn OmniAir Certification for our roadside unit and onboard unit. Certification gives municipalities peace of mind, proving that our products can be easily integrated into any network to provide a safe driving experience between cities.

As smart cities across the US continue to take great strides toward revolutionizing mobility, it’s only a matter of time before V2X technology reaches mainstream adoption. Until then, Danlaw will continue to develop customized V2X solutions for cities of all sizes. Together we can create smarter vehicles, safer roads, and more efficient cities from coast to coast.